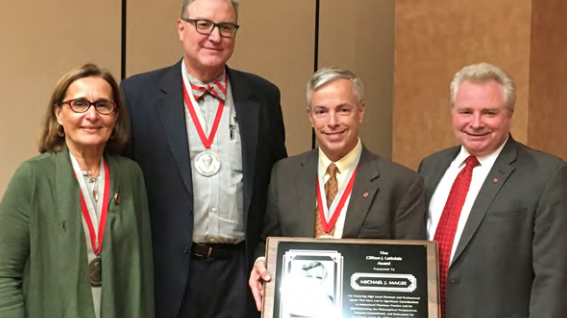 This prestigious award is peer-selected by the past Latiolais Awardees from the program alumni who have shown significant achievements and contributions to the pharmacy profession.

Recognized as a Fellow of the American Society of Health-System Pharmacists, Michael has been active in professional organizations with numerous committee and council assignments at ASHP. He is a past president of the Florida Society of Health-System Pharmacists and served as a faculty member of the ASHP Pharmacy Leadership Academy. Michael has been described as a mentor, an instrumental leader in pharmacy, and an advocate for the profession.

The award was presented to Michael at the 2016 Clifton J. Latiolais Luncheon at the Midyear Clinical Meeting in Las Vegas, Nevada.

Our community leaders are joining us today for our behind-the-scenes “scrubs” tour of St. Joseph’s Hospitals. #TampaInScrubs

The team at Morton Plant Hospital’s Center for Advanced Valve and Structural Heart Care recently became the first in the state to use the minimally invasive #TAVR procedure to treat a patient with aortic regurgitation. https://bddy.me/3jbV9OW